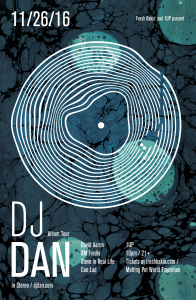 One of the first massive’s I ever attended was a Clockworks event (I think maybe Atlantis), it was in an old run down warehouse in Oakland sometime in the late 90’s. The DJ that stuck out to me that night was, DJ Dan. His choice of track selection at the time was really cutting edge. I can remember specifically Klubstompers “Kicking hard, Jan Driver’s “Overdrive” and tons of other great jams. I immediately went to the record store the next day and bought everything I could find from his set the previous night.

Since then I have had the pleasure of playing multiple events with Dan and have always looked up to him as a pioneer in great house music. It’s been a long while but once again I have been granted the pleasure of DJ’ing alongside Dan at 1UP in Reno, Nevada. A huge thanks to Fresh Bakin for the invite, as I rarely get to throw down some proper beats in Reno these days.

See you all on the dance floor!

We’re down at the @feedthecamel so come say hi!

Sound was on point, lights and lasers from @summit

Saturday night in Reno, this is the place to be..

Still one of my favorite exhibits of all time prob

We have one of Reno's best taco trucks rolling up

Should I treat my work tonight? 🤔 #aprilfools

Some of the home cooking from this past week #shoy

A cool shot flying over Greenland, it was the midd

Ohhh that’s how you do it…

Back from France and in case you don’t follow @n

Felt great to comb through new vinyl today. Thanks

A quick stop by Sainte Chappelle